Welcome to Day 300 of our Life Journal! 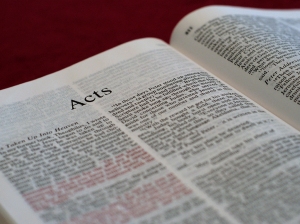 Congratulations on making it thus far. We are now on the home stretch!

Job 18:1, ” Then Bildad the Shuhite replied: 2 ‘When will you end these speeches? Be sensible, and then we can talk. 3 Why are we regarded as cattle and considered stupid in your sight? 4 You who tear yourself to pieces in your anger…'”

Acts 27:20, “When neither sun nor stars appeared for many days and the storm continued raging, we finally gave up all hope of being saved. 21 After they had gone a long time without food, Paul stood up before them and said:

‘Men, you should have taken my advice…

…not to sail from Crete; then you would have spared yourselves this damage and loss. 22 But now I urge you to keep up your courage, because not one of you will be lost; only the ship will be destroyed. 23 Last night an angel of the God to whom I belong and whom I serve stood beside me 24 and said, “Do not be afraid, Paul. You must stand trial before Caesar; and God has graciously given you the lives of all who sail with you.” 25 So keep up your courage, men, for I have faith in God that it will happen just as he told me. 26 Nevertheless, we must run aground on some island.’”

Acts 28:7, “There was an estate near by that belonged to Publius, the chief official of the island. He welcomed us to his home and showed us generous hospitality for three days. 8 His father was ill in bed, suffering from fever and dysentery. Paul went in to see him and, after prayer, placed his hands on him and healed him. 9 When this had happened, the rest of those on the island who were ill came and were cured. 10 They honoured us in many ways; and when we were ready to sail, they furnished us with the supplies we needed.”

28 “‘Therefore I want you to know that God’s salvation has been sent to the Gentiles, and they will listen!’ 30 For two whole years Paul stayed there in his own rented house and welcomed all who came to see him. 31 He proclaimed the kingdom of God and taught about the Lord Jesus Christ – with all boldness and without hindrance!”

Then Acts just… ends, leaving us to wonder what happened before Caesar in Rome!

Paul had some… exciting… journeys!

Amazing how Paul was bitten by a Viper and had no ill effects… Yet he told his men to eat, because they needed it to survive the shipwreck. He walked in both the natural (eat!) and the supernatural (bitten but not ill.) They still had to swim for shore… after the guards toyed with the idea of killing all the prisoners…

What an up and down ride it was for Paul getting to Rome.

Then, after praying for the chief official of the island’s father, who was healed, all the sick were brought to him, he prayed and they all were healed!

The natives said, “He survived the shipwreck, but now he’s going to die from a snake bit. Justice prevails!” But when he didn’t die, they thought he must be a god!

Obviously, they knew their snakes… they knew he should have fallen down.

Then, once he finally made it to Rome, he was given freedom to come and go from his own rented home!

I posted Paul’s resume of hardships a few days ago… from 2 Corinthians 11.

It’s always interesting to me what he had to endure, and what he managed to escape. One might ask (and I often do…) Why if God is with him did he get beaten, imprisoned, shipwrecked, etc?

I believe it was to share in the sufferings and glory of Christ. They considered themselves “Heirs of God and co-heirs with Christ, if indeed we share in his sufferings in order that we may also share in his glory.” Romans 8:17.

For some reason, because a few people in the Bible escaped death here and there (Daniel and the lion’s den, Peter and John, Paul and Silas from prison, that we should somehow escape hardship. That by worshiping in our cell will certainly cause an earthquake that will save us.

What about John the Baptist? Jesus said there was none greater among men… AND, he was Jesus’ cousin… doesn’t make sense, does it?

Why would I think I would have it any better than he?

The Bible doesn’t tell how Paul died… It is commonly believed that sometime in the mid 60’s AD under the reign of Nero that Paul was possibly… beheaded.

However his life came to an end, we can be sure of this… he was teaching and proclaiming Christ and the Kingdom of God and writing letters to believers everywhere until the very end. (The books of Ephesians, Philippians, Colossians and Philemon were all written from prison.)

What am I saying today? I hope I don’t sound fatalistic. I’m just being realistic. We only hear about the ones raised from the dead, not the ones they prayed for that didn’t come back to life. We often hear how the Apostles escaped prison, not how they were martyred. (Except for Stephen.)

Just pondering this thought today, we are

“Heirs of God and

Lord I believe that you will give me all that I need when I need it. I know it’s likely that I will never face death for what I believe… but if I do, I believe you will be with me and strengthen me to die well for your glory.